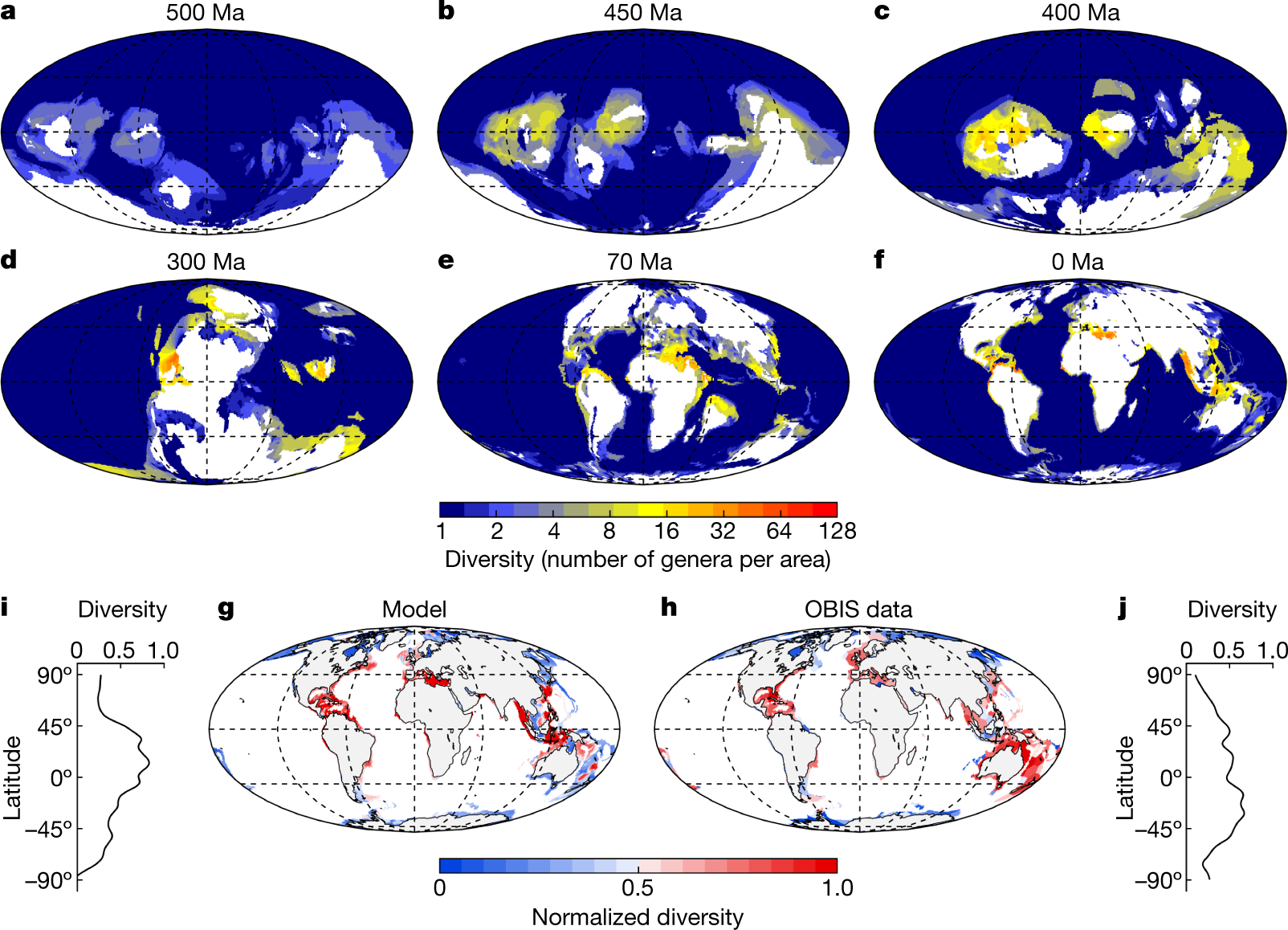 Highlights: We present a regional diversification model that reproduces the main Phanerozoic Eon trends in the global diversity of marine invertebrates after imposing mass extinctions. We find that the dynamics of global diversity are best described by a diversification model that operates widely within the exponential growth regime of a logistic function. A spatially resolved analysis of the ratio of diversity to carrying capacity reveals that less than 2% of the global flooded continental area throughout the Phanerozoic exhibits diversity levels approaching ecological saturation. We attribute the overall increase in global diversity during the Late Mesozoic and Cenozoic eras to the development of diversity hotspots under prolonged conditions of Earth system stability and maximum continental fragmentation. We call this the “diversity hotspots hypothesis”, which we propose as a non-mutually exclusive alternative to the hypothesis that the Mesozoic marine revolution led this macro-evolutionary trend.

Highlights: We present a model for Simulating Plankton Evolution with Adaptive Dynamics (SPEAD), where phenotypes characterized by two traits, nitrogen half-saturation constant and optimal temperature, can mutate at each generation. We use “trait diffusion” as the approach to sustain diversity and simulate adaptive evolution of physiological traits. SPEAD does not resolve all phenotypes, computing instead six aggregate properties: biomass, mean traits, trait variances and inter-trait covariance. The adaptive dynamics are driven by vertical and seasonal variations in water temperature, irradiance, vertical mixing, and nutrient concentration. The bulk properties are validated by observations from station BATS in the Sargasso Sea.

Highlights: We provide a review of the state-of-the-art of models in microbial ecology, ranging from the microscopic level (e.g., resource uptake) to the macroscopic level (e.g., spatial organization). Special emphasis is given to the modelling of (i) uptake kinetics, elemental stoichiometry and functional trade-offs; (ii) food web and eco-evolutionary dynamics; (iii) micro-scale variability and social behavior in microbes. The overarching point of view is the use of theoretical models to improve our understanding of how microbial communities operate and affect ecosystem functioning.

Highlights: We use statistical methods for causal inference to investigate the drivers of marine invertebrate diversity dynamics through the Phanerozoic. We find that diversity dynamics responded to secular variations in marine food supply, substantiating the idea that global species richness is regulated by resource availability. Once diversity was corrected for changes in food resource availability, its dynamics were causally linked to the age of the subducting oceanic crust. We suggest that the time elapsed between the formation (at mid-ocean ridges) and destruction (at subduction zones) of ocean basins influences the diversity dynamics of marine invertebrates and may have contributed to constrain their diversification.

Highlights: We developed a continuous trait-distribution model for a phytoplankton community of gleaners (those species that do well when nutrients are scarce) competing with opportunists (species that do well when nutrients are plentiful). Then we subjected the model community to differing frequencies of disturbance, in order to examine diversity-productivity relationships at different time-scales. This study revealed that more diverse communities tend to be more productive in the short-term under frequent disturbance because diversity enhances adaptive capacity, which is the ability to recover from sudden changes in environmental conditions. On the other hand, less diverse communities tend to be more productive over long periods with infrequent disturbance, because then the most productivie community is composed of (nearly) identical species having just the optimal traits (inherent characteristics) for the nearly constant environmental conditions. Taken together these results show that more diversity does not in all cases enhance productivity, but that the diversity-productivity relationship changes with the frequency of disturbance.

Highlights: Diatoms are silica-precipitating microalgae responsible for roughly one-fifth of global primary production. The mechanisms that led these microorganisms to become one of the most prominent primary producers on Earth remain unclear. We explore the linkage between the erosion of continental silicates and the ecological success of marine diatoms over the last 40 My. We show that the diversification and geographic expansion of diatoms coincide with periods of increased continental weathering fluxes and silicic acid input to the oceans. On geological time scales, the ocean’s biologically driven sequestration of organic carbon (the biological pump) is proportional to the input flux of inorganic nutrients to the oceans. Our results suggest that the strength and efficiency of the biological pump increased over geological time.

Highlights: We use a marine ecosystem model together with the community assembly theory to explain the shape of the unimodal productivity-diversity relationship (PDR) we observe at the global scale for phytoplankton. The positive slope from low to intermediate productivity is due to grazer control with selective feeding, which leads to the predator-mediated coexistence of prey. The negative slope at high productivity is due to seasonal blooms of opportunist species that occur before they are regulated by grazers. The negative side is only unveiled when the temporal scale of the observation captures the transient dynamics, which are especially relevant at highly seasonal latitudes. Thus selective predation explains the positive side while transient competitive exclusion explains the negative side of the unimodal PDR curve. The phytoplankton community composition of the positive and negative sides is mostly dominated by slow-growing nutrient specialists and fast-growing nutrient opportunist species, respectively.

Highlights:We describe a kill-the-winner formulation that combines active switching with maximal feeding. Active switching is shown to be a community response in which some predators become prey-selective and the formulations with maximal or non-maximal feeding are implicitly assuming different food web configurations. Global simulations using a marine ecosystem model with 64 phytoplankton species belonging to 4 major functional groups show that the species richness and biogeography of phytoplankton are very sensitive to the choice of the functional response for grazing. The phytoplankton biogeography reflects the balance between the competitive abilities for nutrient uptake and the degree of apparent competition which occurs indirectly between species that share a common predator species. The phytoplankton diversity significantly increases when active switching is combined with maximal feeding through predator-mediated coexistence.